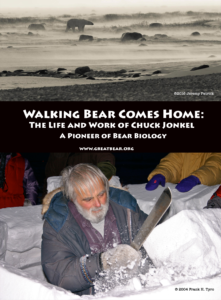 This Thursday, April 20th @ 5:00 p.m. is the World Premiere of Walking Bear Comes Home: The life and work of Chuck Jonkel.  It’s at the Roxy Theater as part of the 40th Annual International Wildlife Film Festival.  There’s a reception at the Roxy beforehand, and a celebration afterwards at Western Cider.

Read more about the film (and DVD release) at the Great Bear Foundation.

Hope to see you Thursday.

Work on the Marshall Woods Restoration Project is getting underway.   Missoula District Ranger Jennifer Hensiek met with the Lolo Restoration Committee last week and went over the timetable of work scheduled for Summer 2016.  It’s an ambitious schedule and the project impacts (e.g. chainsaw noise, temporary trail closures) will be noticeable for anyone hiking or biking in the area.  The work details will alternate between the Rattlesnake main corridor and the Woods Gulch area, so you can avoid the loggers by choosing one or the other location according to the schedule and map.

END_OF_DOCUMENT_TOKEN_TO_BE_REPLACED

It’s a beautiful summer in the Rattlesnake!  And if you need an excuse to get up there this weekend, tomorrow is National Get Outdoors Day! (Really—who thinks of these “official” days anyway? We live in Montana, it’s always “Get Outdoors Day”!)

But seriously it is nice out.  In the past two weeks I’ve had the pleasure of seeing 3 pretty orchids along the Woods Gulch and Spring Gulch trails within the Rattlesnake Recreation Area: 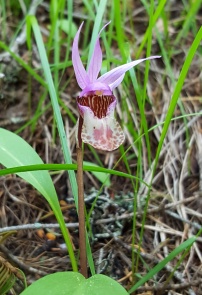 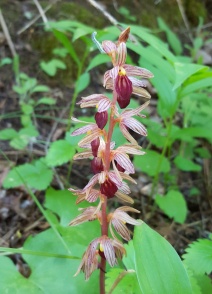 These are the Fairy Slipper (Calypso bulbosa), Mountain Lady’s-slipper, (Cypripedium montanum), and Striped Coralroot (Corallorhiza striata).  Identifications were confirmed at the Montana Field Guide website , where you may be surprised by the number of MT native orchid species!  I’ve seen a few of the other species from that page around western Montana but I don’t have any photos of them in the Rattlesnake—if you have other recent sightings and photos, feel free to email them and I’ll update this page.

By the way, you may have noticed RCWG’s absence from this website and other social media during the past few months—we’re still around but all-too-often distracted by various other endeavours.  We’d be glad to have help on projects like monitoring the Lolo N.F.’s upcoming Marshall Woods restoration project, managing invasive plants like buckthorn, taking care of apples and other bear attractants in the valley, along with other projects that interest you.  Drop us a line (when you get back from your hike).

We’re hosting a Community Apple Pressing this Saturday afternoon, Oct. 10, on the south side of Pineview Park (just west of Rattlesnake School) in the middle Rattlesnake. We’ll be there from 1-5 pm with a cider press from MUD (Missoula Urban Demonstration Project).

We have quite a few apples (and some pears) to press because we’ve been volunteering with the Great Bear Foundation to harvest surplus fruit around the valley.  You can bring your own apples and/or pears, along with containers to take home any cider you press (figure about 1 gallon of cider per 18-30 lbs. of apples, depending on how juicy they are).

My Fruit Tree Brings the Bears to the Yard

As you’ve probably heard or even seen, there are a lot of black bears in the Rattlesnake Valley right now.  The Lolo National Forest just closed several of the more popular trails in the Rattlesnake Recreation Area, including Spring Creek and the trails between the main road and the creek (map and announcement) where there have been a higher-than-usual number of bear sightings.

However… you don’t have to go to the wilderness to find bears in the Rattlesnake! If you live in the valley there are probably several bears within a mile of you right now, and it’s better for everyone if those bears stay in the open space corridors instead of in our yards.

This time of year there are two big things drawing black bears into the residential neighborhoods of our valley: fruit and garbage.

You can help protect your neighbors and the bears.

Don’t put your garbage out till the morning of your pickup!  (If you live in an area with a very early pickup, such as the Lower Rattlesnake, talk to your neighbors who might need help getting their trash out early).

Harvest your apple, pear and plum trees! If you’re too busy or you have too much fruit to handle yourself, there’s good help available from the Great Bear Foundation or from Garden City Harvest. RCWG can mobilize volunteers to help you out too, and we’ll use the apples to make cider at our annual Fall Festival (details soon!).

If you’ve seen bear scat in the past few weeks, you know the bears are eating apples! (Until late August they were eating more cherries and hawthorn berries in my Lincoln Hills neighborhood). Apples themselves won’t hurt bears, but as bears go into yards and spend time near houses and other nearby food sources, they become habituated and potentially dangerous. These bears may need to be removed and in some cases killed. That typically happens to up to a dozen or so bears in the Rattlesnake each year, but in recent years we’ve had better statistics as people have done better at managing attractants like garbage and apples. It’s better for the bears if we harvest the apples for ourselves.

Missoula Bears has a good overview of bear attractants and what you can do about them.  (Fruit and garbage aren’t the only attractants–they can help you with others like chicken coops, compost, etc.)  Missoula Bears is also the place to report a bear sighting or get additional information.

RCWG is participating in this year’s Give Local Missoula Day, an online event that lasts 24 hours starting at midnight tonight (Tuesday, May 5th, from 12:01 a.m. till 11:59 p.m.).  You can help us out by donating online here.

Last year was Missoula’s first year participating in the national Give Local America Day, and the results were better than organizers expected: 90 local nonprofit groups participated, and our community made over 1900 donations totaling more than $135,000.  This year there are more nonprofit groups, including 18 environmental organizations whose company RCWG is proud to share :-).

This year a number of other towns in Montana have organized their own local efforts. So in the spirit of friendly competition, please help keep Missoula #1 in terms of local nonprofit support!

If you choose to donate to RCWG this year (and even if you don’t donate), we’d really appreciate your input on priorities you’d like to see for our group.  In recent years we’ve worked on issues related to environmental restoration, improving fish habitat, combating noxious weeds and harvesting Rattlesnake apples to help bears and people avoid conflicts.  Tell us what you’d like to see in a few words or sentences with your donation or by email.  Thanks! 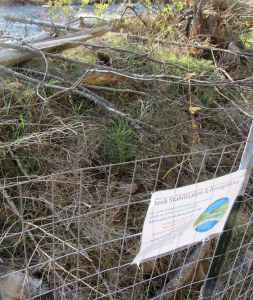 If you’ve hiked up the main trail in the Rattlesnake Recreation Area, you’ve noticed the fenced off area just downstream from the “horse bridge”.  Last year RCWG joined forces with the Lolo N.F. to plant trees and shrubs within that fenced off area where the streambank was rebuilt.  The broadleaved shrubs (wild rose, willow, dogwood, etc.) that we planted last year all seem pretty well established, but sadly, the ponderosa pine seedlings experienced frost damage and mostly died off during the year.  So last week we went back up with some fresh young trees to try again.

These little pines will need some extra watering to make it through the coming summer.  If you’re hiking by and notice that they look dry, please drop us a line and we’ll send someone out.  Better yet, you can join us as a volunteer–we’ve got some watering cans stashed nearby.  Send us an email and we’ll send you some more information–there are a couple dozen ponderosa seedlings and some of them are a little hard to find among the branches and downed trees that are providing extra cover on the site.

The Lolo N.F. specialists will determine when it’s time to take down the fencing–it’ll probably stay up through this year.

The public comment period has been extended for the Marshall Woods Environmental Assessment. You have until the end of this month (April 30th) to submit substantive comments on the plan.  One (or two) way(s) to learn more about the project would be to join a guided field trip of parts of the project.

Image from the Lolo N.F. Marshall Woods Restoration Project information page (click on image for link to pdf document). This graphic is used by project proponents to illustrate the potential improvement in ecological “resilience” of managed forests in this region.

Specialists from the Lolo Restoration Committee and the Lolo N.F. Missoula Ranger District will lead field trips on Tuesday, April 14th (5-8 p.m.) and Saturday, April 18th (1-5 p.m.).  The Tuesday trip will start near the Main Rattlesnake Trailhead; the Saturday trip will take place adjacent to Marshall Canyon near the Woods Gulch (Section 31) portion of the project area. Note: Saturday trip will meet at Eastgate Shopping Center at 1:00, travel in F.S. shuttle vehicles to field trip.

For additional information please consult the project information page which has links to the full Environmental Assessment and an updated list of FAQs. This is an important project that will have impacts (both positive and negative) on the ecosystems and the recreational users of the Rattlesnake NRA, Woods Gulch and Marshall Canyon areas.

The Lolo National Forest has released its Environmental Assessment (EA) for the Marshall Woods Restoration Project, “an integrated project to improve forest stand conditions and reduce hazardous fuels in the lower Rattlesnake Creek drainage and the Marshall Creek-Woods Gulch area”.  They’re hosting a public meeting this coming Wednesday evening, March 18th, 6-8 p.m. at the Doubletree Hotel. Public comment will be accepted through April 6th.  The RCWG is evaluating the proposed actions this month and we’ll be submitting comments.

As you can see from the the Lolo NF links and the Google Earth view below, this project is pretty big–the project area encompasses about 20 square miles, and “treatment” (mainly thinning and prescribed burning, along with some trail and road modification and noxious weed control) is proposed for almost 4,000 acres within the Rattlesnake and Marshall Creek watersheds.

END_OF_DOCUMENT_TOKEN_TO_BE_REPLACED

We enjoyed very nice weather at the 2013 Fall Festival (pictured above). Don’t worry, if it’s colder this year you can warm up with fresh-pressed hot apple cider!